Because the BF and I had a memorable (mostly because of the very-worth-it $55 per person price tag) Christmas eve buffet at Windows on Bukit, we decided on the same place for New Year's Eve. Besides. it's a different menu so we weren't eating the same things.

You know, the one thing about writing a food blog is having to take pictures of every dish before I begin to eat. I'm still having trouble sometimes remembering to take photos before I attack my food. My colleagues are wonderfully supportive in that they constantly remind me if I forget to take pictures, and they actually pass the dishes to me and then patiently wait for me to finish taking pictures. Okay, sometimes there is playful ribbing about dying of starvation yadda yadda yadda.

We were seated in the middle of the restaurant today, so it was a much livelier and conversely, less romantic ambience. The restaurant was still a full-house (well, the club has thousands of members and Windows on Bukit is a pretty small restaurant). We had a glass of champagne each, which is complimentary of the buffet. 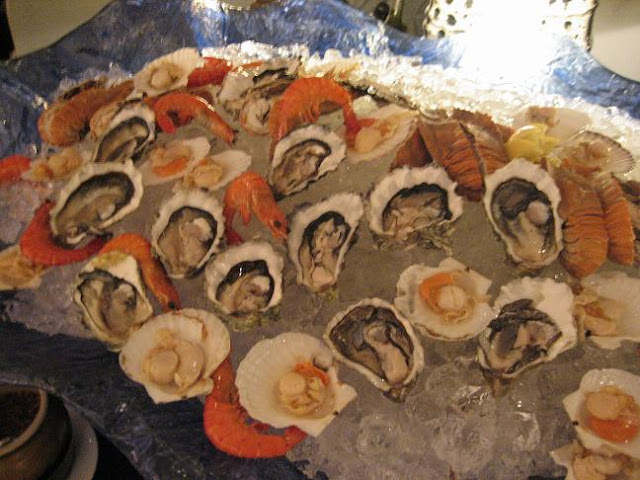 The Smoked Salmon and Mackerel were suitably smoked but a little too salty for my liking. I'm not a huge fan of smoked fish. 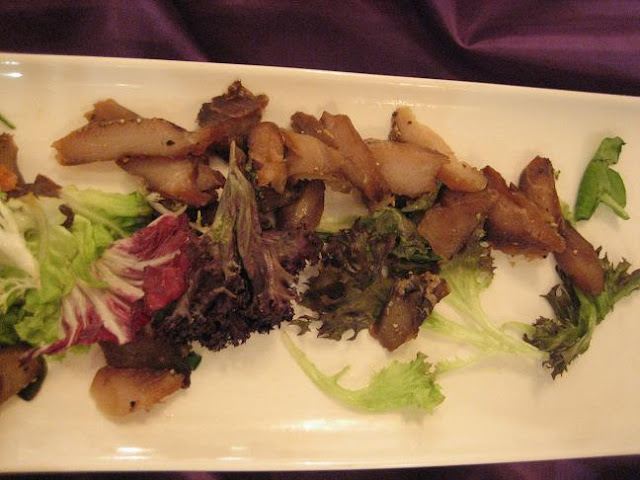 The Black Forest Ham was redolent of berries and pronounced in taste but a little dry. I preferred the carving pineapple glazed ham. 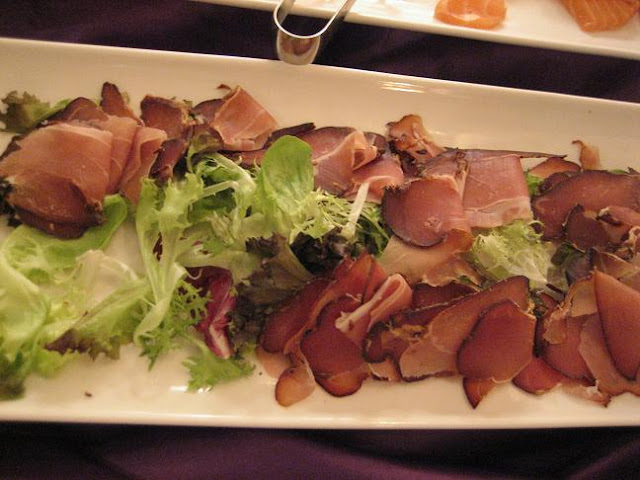 The Potato Salad was a little too citrusy, a lighter hand with the lemon wedges would have been better. At least it wasn't drenched in too much mayonnaise. 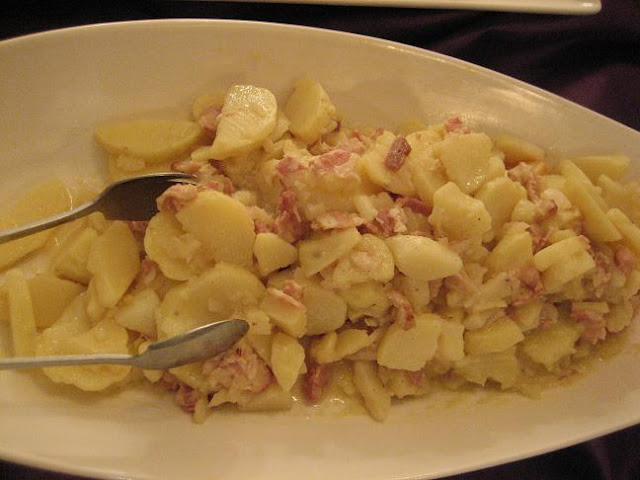 There was a small selection of Assorted Sushi and Maki Rolls. These were fresh, but otherwise unspectacular. 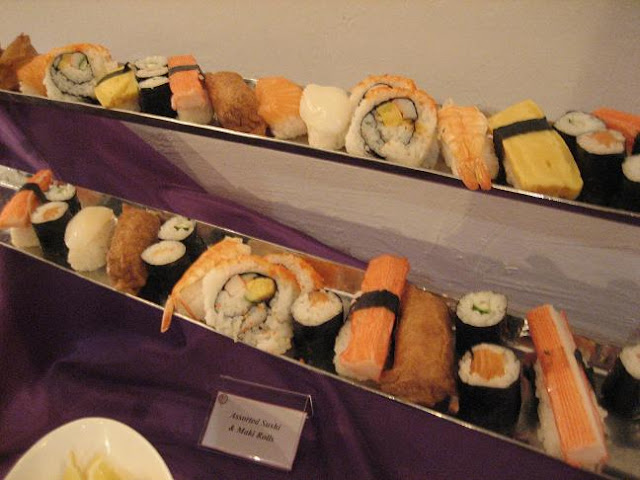 The soup was Lobster Bisque scented with XO Cognac. This was too heavy and rich for my liking. I prefer my lobster bisque nuanced and balanced. I've realised that in general, steakhouses have the best lobster bisques, 2 of the best I've ever had was at Ruth Chris's and Morton's. 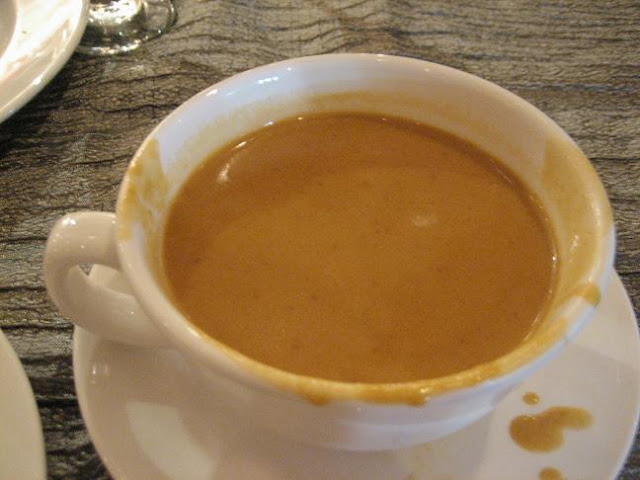 The carving station fared much better. The Pineapple Glazed Boned Ham was stellar. It was succulent, sweet, salty, and when paired with the pineapple glaze sauce, was an explosion of piquant and smoky flavours. 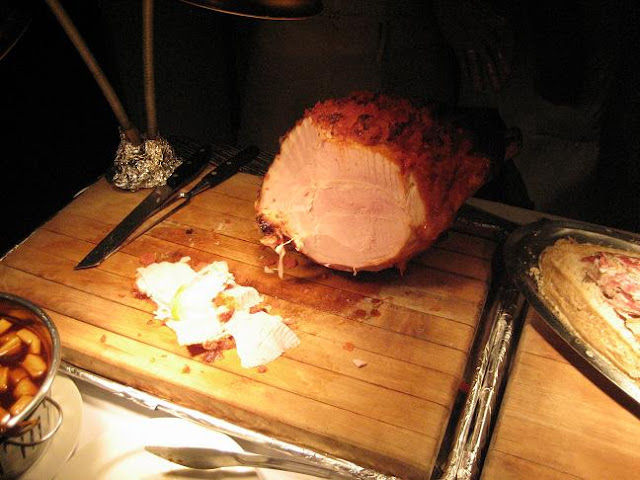 The Roasted Prime Rib of Beef was also pretty commendable, it was robust and full-bodied, and the Black Pepper Whisky Sauce complimented the juicy red meat. 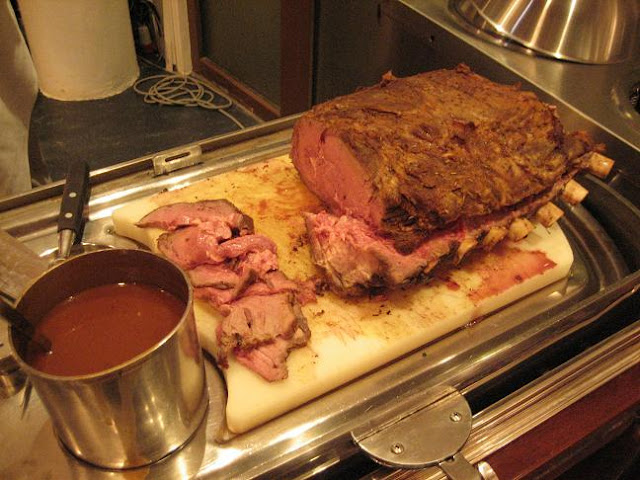 The Whole Baked Snapper in Salt Crust with Morel Sauce was moist, flaky and clean in flavour, a result of the salt crust preserving the natural juices of the fish. 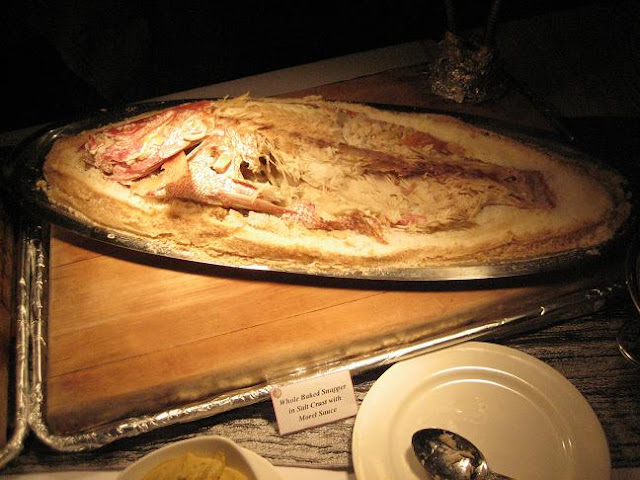 For the mains, I loved the tantalising fragrant and aromatic Tandoori Prawns. I went back for extra helpings of this. 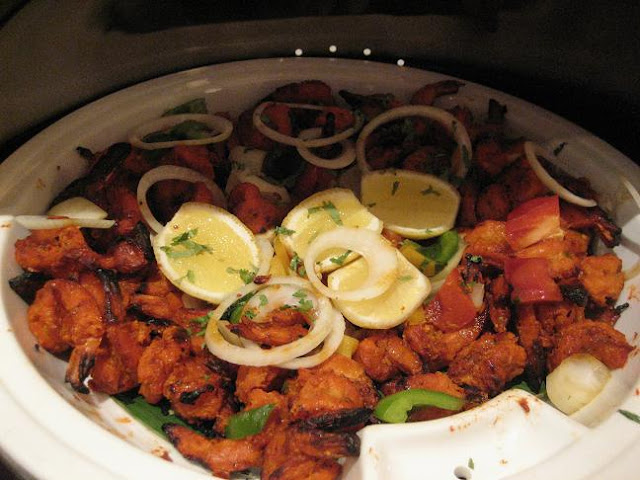 The Garlic Naan was also another stellar dish, it was addictively soft and tender, and had the wonderful spiced scent of the Tandoor oven. It was a real pity there wasn't any daal (lentil curry) or curry to go with the naan. 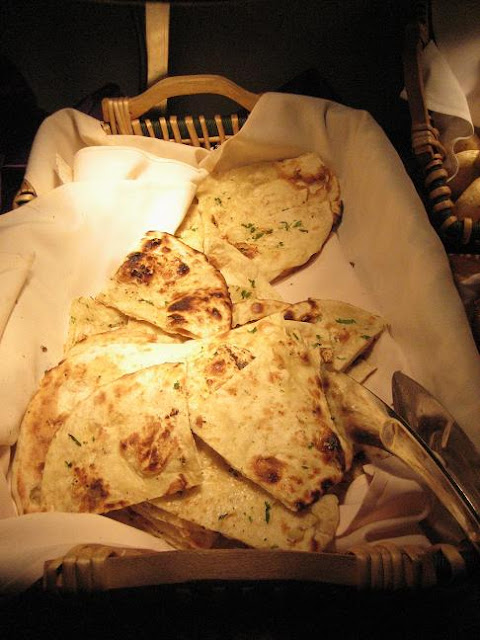 The Slow-Roasted Rack of Lamb with Vine Tomato Confit was too gamey and tough. It would have benefited from a few more hours in the oven and a more generous helping of rosemary. 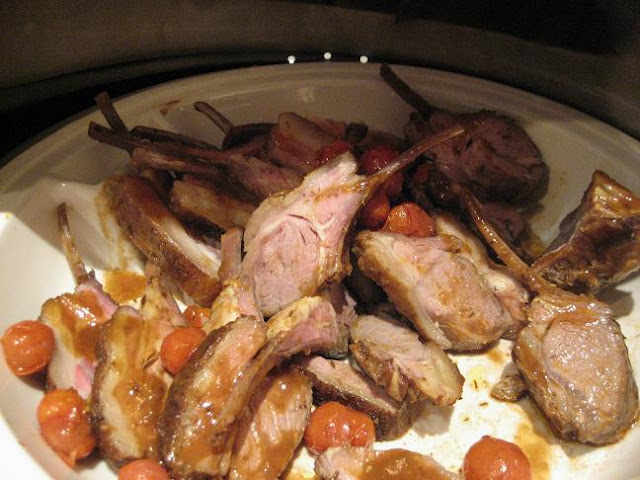 The Miso-Glazed Cod with Spring Onions was a little ordinary, and I would have preferred more searing of the skin. 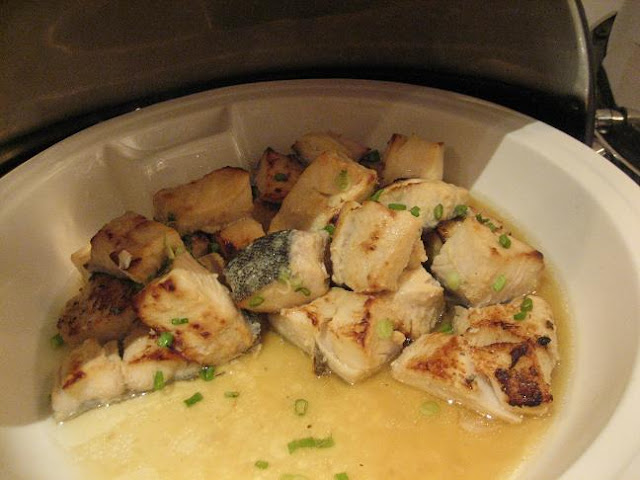 The Roasted Potatoes with Rock Salt and Rosemary was very good, I liked the distinctive scent of rosemary infused into the tender potatoes. 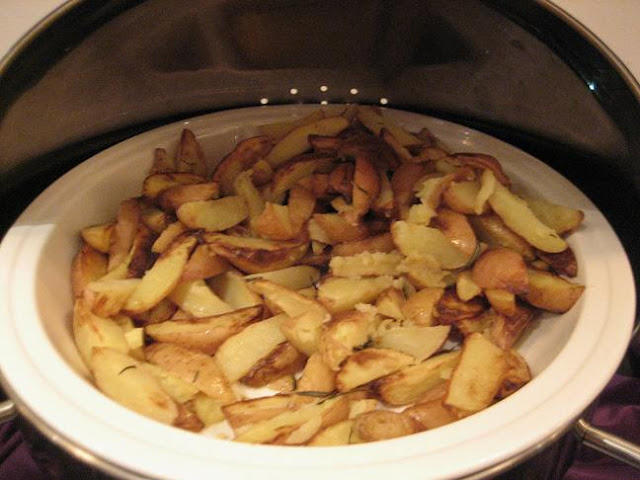 The Paella Valencia was also pretty ordinary, it was a little dried out and bland. More seafood stock and saffron would have probably helped. 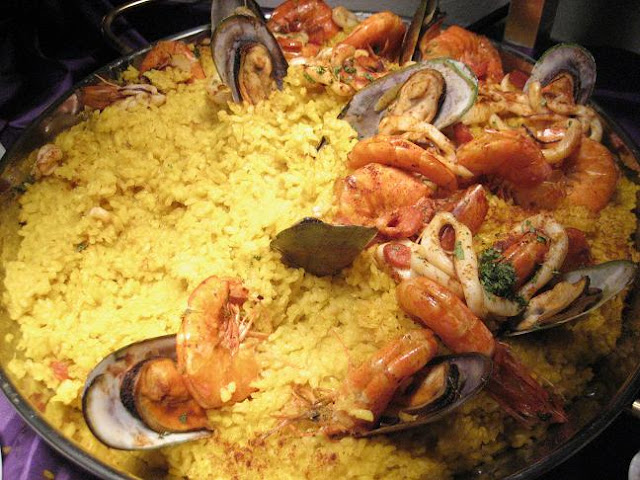 The Crab Meat Fried Rice was commendable, it had the "wok hei", each grain of rice was well fried and wasn't too oily. 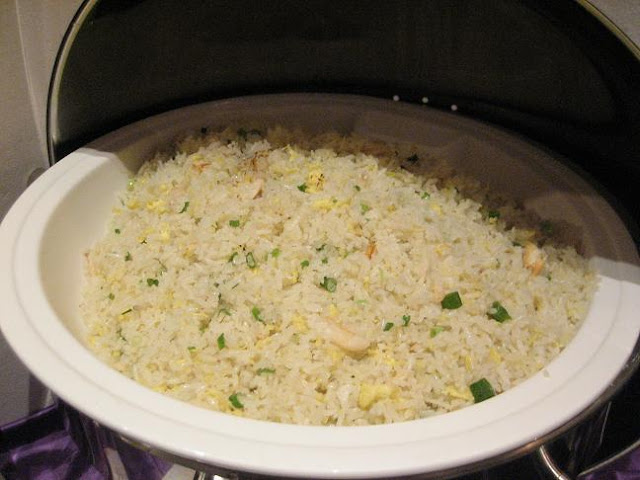 The desserts are the stars of the buffet. SICC generally does very yummy desserts. 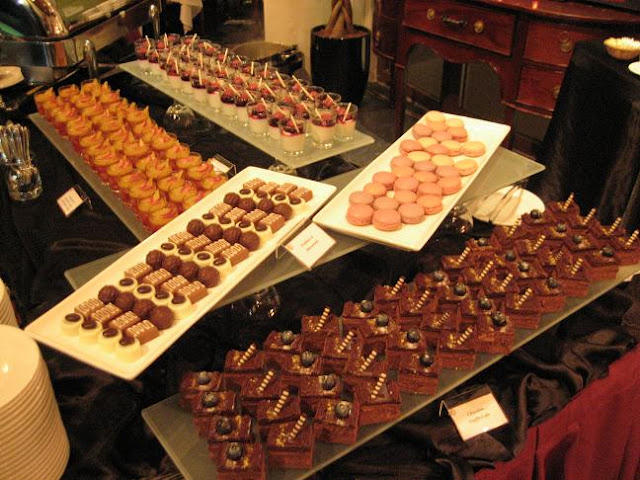 We started with the Chocolate Truffle Cake, a decadent concoction of dark chocolate ganache and dense chocolate sponge. 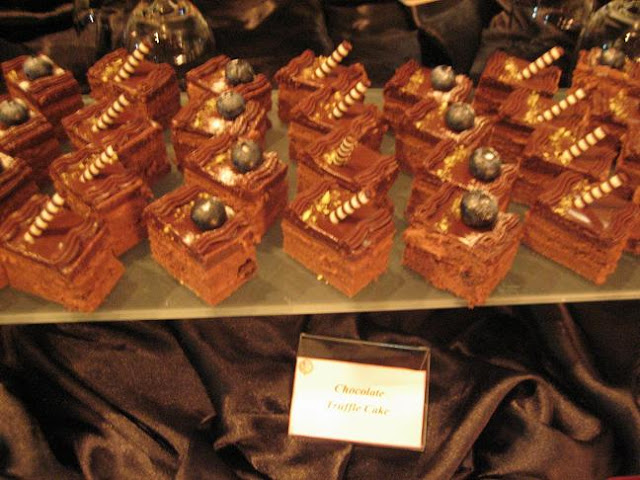 The Pralines and Macarons were my second favourite desserts. The macarons were exquisitely airy and delicious. I helped myself to countless helpings of these. 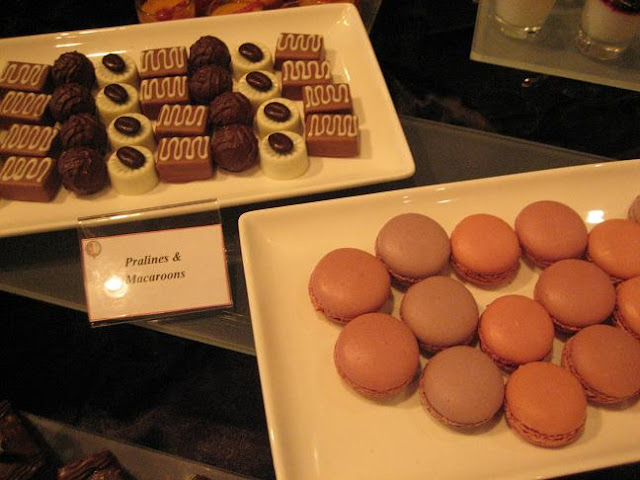 The Yoghurt Mousse with Forest Berries was a little too sour for my liking though the acidity would have been perfect to improve digestion. 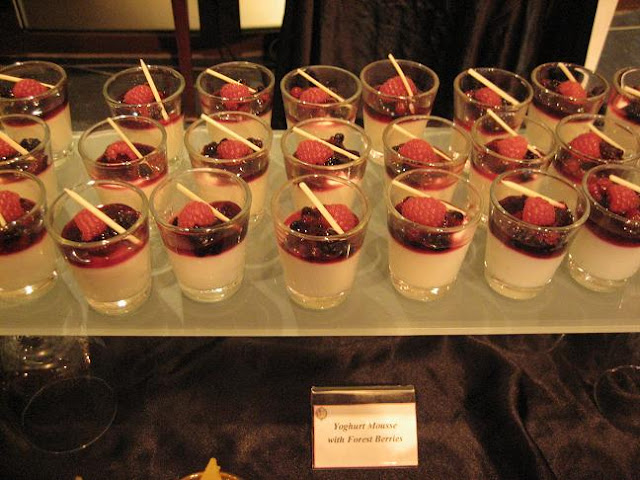 The Champagne and Strawberry Aspic with Mango Coulis was refreshing enough but the strawberry was a little too sour as well. 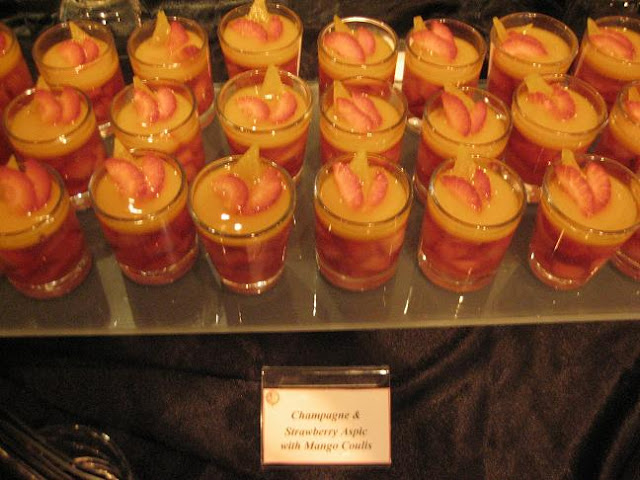 The Italian Panettone Cake, an Italian version of the Christmas fruit cake, was dense, rich and laced with a fruity liqueur. The Poached Fresh Peach Compote with Basil was unexpectedly slurpilicious. It was sticky and refreshingly sweet. 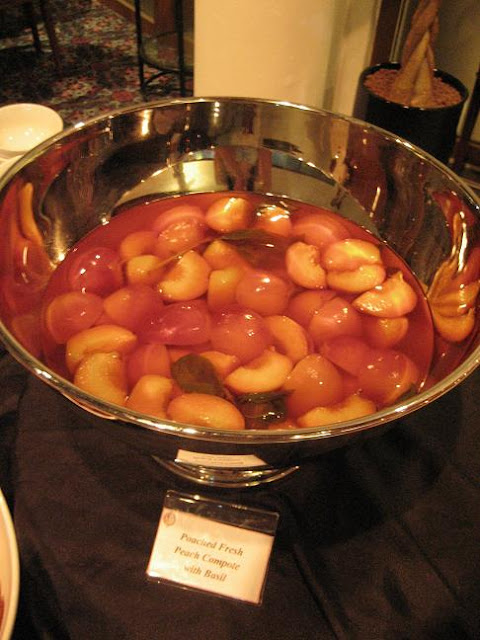 The Bread and Butter Pudding with Brandy Sauce had a well-baked crust which revealed a smooth, moist and fluffy pudding inside. 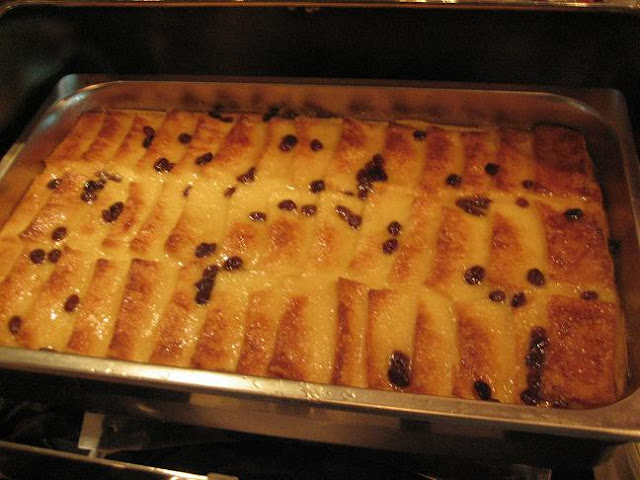