Mykonos on the Bay

Helloooooo!!!! Wow that was an extremely extended silence huh?? Quick update, everyone's fine, in good health, happy... It's simply that life got busy (I've gone back to school, part-time, that is!) and between the classes and homework and tests (omggg, so many tests 😓😱😭...I question my decision to return to the student life Every.Single.Time. the exams roll around), and tv and the gym, and spending time with The Hubs (of course!!), my life was très occupé. Soooo, blogging took a backseat (bigtime!) and to be honest, I wasn't particularly inspired to write. And while I'm back, it's with the caveat that my blogging will likely be sporadic.

I'm not sure if you'd noticed, but I'm not a fan of Greek food. To be fair, I don't know much about and neither have I sampled much of Greek cuisine. I think, it's largely coz we've a dearth of Greek restaurants here in SG: Greek cuisine isn't quite as ubiquitous as, say, Italian or even Argentinian fare, especially in this part of the world. I'd only ever eaten at Blu Kouzina, and it was terribly blah that I'd written off Greek food then...so although Izzy returned from her honeymoon in Greece, raving about Greek food, I wasn't convinced.

That all changed recently, after our Greek friend (I call him "The Greek" heh), who'd been scandalized to discover our disparagement of Greek cuisine, was determined to educate (and hopefully cultivate a love for!) us on Greek cuisine.

He'd brought us to Mykonos on the Bay,..."the only restaurant I go to for a taste of home" he declared. It's been around for yonks (like seriously, it's been there for more than a decade, which is no mean feat!!), and while I've noticed it, while dining at Sabio or Greenwood, I'd never felt compelled to try it.

Thankfully my friends have good taste. The Greek did his heritage proud, and was absolutely bang-on with his favorite go-to. And I finally(!) get the fuss about Greek cuisine. It's clean, it's fresh, it's simple and yet so hearty and comforting and flavoursome. For some reason, it reminds me of Italian cuisine: just good ingredients and uncomplicated but sublime cooking.

We started off with the Mykonos Dip Platter ($26), a trio of dips traditionally served in every Greek restaurant. (I'd asked about hummus, which warranted the death-stare from The Greek hahaa: it's Turkish, not Greek. At all.) From left, we had the Taramosalata, a beautifully pink mousse of salmon fish roe whipped with ground almonds, olive oil and lemon juice. This was surprisingly delicate and nuanced, I'd expected a fishy aftertaste but there was none to be had!! Next up was my favourite: the Melitzanosalata, a grilled eggplant spread mashed with garlic, olive oil, onions, tomatoes and lemon juice. I don't even like eggplant (except eggplant parmigiana), but I loved this. It was subtly smoky and sweet, with the barest hint of a spiced kick. The Tzatziki, a crisp and refreshing dill and cucumber yoghurt spread, was the Hubs' favourite. All of them were fantastic on their own, or mixed together, and smashing with that freshly baked pita bread. Crazy good, we ordered another round of pita. 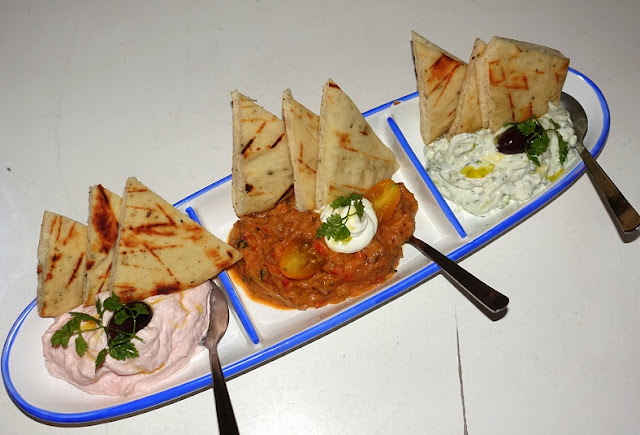 The Mixed Grilled Platter ($187 for 4pax) was a carnivore's wet dream: loaded with lamb chops, chicken sausage, gyros shavings, ribeye, minced lamb skewers, and a little side salad and tzatziki. I've never been keen on lamb, but both the lamb chops and minced lamb skewers were out-of-this-world delicious. Succulent and wonderfully marinated, they'd been imbued with a fragrant char from the grill. Special mention must be given to those luscious pork gyros, they were addictive AF. That being said, the Australian ribeye was middling. I could have done without it. 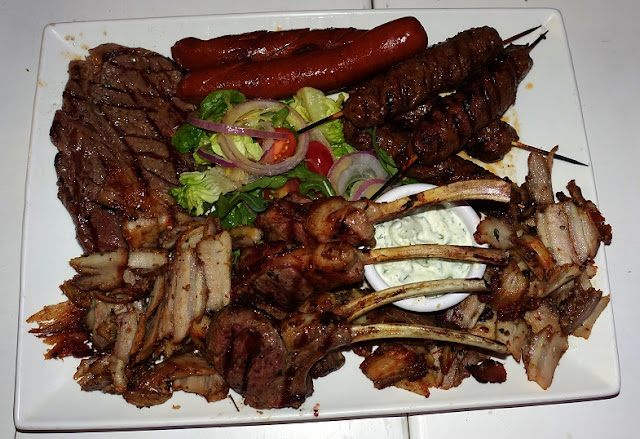 The meat platter was sided by homemade Potato Fries and a Pita basket (yup, we had 2 whole baskets of pita, which naturally, we didn't finish and so The Greek doggy-bagged them home for his cutie-pie daughter). I swear they cooked these fries in some kind of opium-laced fat, they were glorious! 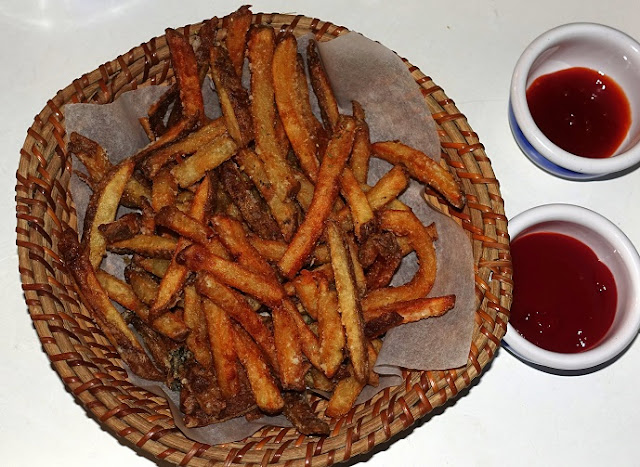