We were grocery shopping at Meidi-Ya and wanted a change-up from our usual ramen at Come-In-Hokkaido, so we hopped on upstairs to the second floor to Shin Yeh, the Taiwanese import by Tung Lok. Shin Yeh marks my virgin foray into Taiwanese cuisine. I've never been to Taiwan (I don't think I could get around with my crappy Mandarin), I've never had Taiwanese food and the extent of my association with anything Taiwanese is bubble tea, that crispy chicken thingamajig and Jay Chou's undecipherable songs.

We were surprised to find Shin Yeh relatively sparse on a Friday night. In this day and age where our little island is so densely populated, it was refreshing to find a restaurant that doesn't have a maddeningly cramped atmosphere.

Service was impressively good here, possibly on par with most fine dining establishments. The smiley waitresses were efficient, thoughtful and thorough. Our teacups were always topped up, dishes arrived in quick succession, and my request to hold off the coriander (also known as cilantro, parsley, yan2 xu1 or xiang1 cai4) was relayed by the waitresses to the kitchen for just about every dish.

Notwithstanding there being a great many things on the menu that we don't quite like or would usually order (pig intestines, liver, or oysters), we still ended up enjoying the food served up at Shin Yeh. There was a tastiness in their homestyled fare that we fell in love with.

The 1-person portioned Taiwan-Styled Rice with Soya Lean Pork ($5), a signature here, is a must-order. The innocuous and plain-looking dish was a spectacularly superb dish, and it's all thanks to that lusciously flavoursome oyster-soy sauce gravy drenching the rice. 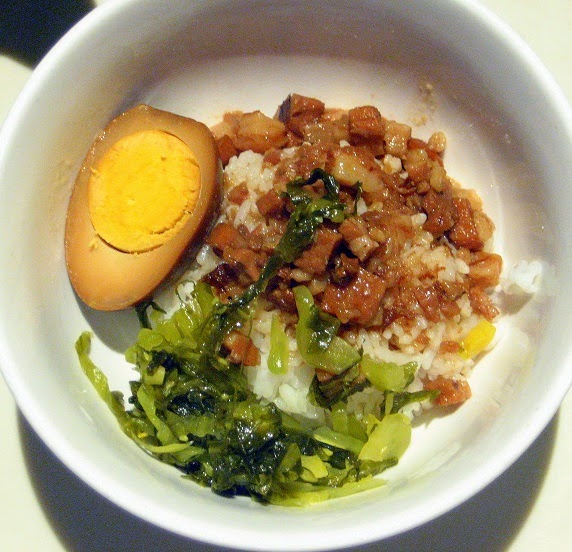 We also enjoyed Wok-Fried Sliced Pork Shoulder with Ginger and Scallions ($20) immensely. The pork was tender and moist, boasting a distinct wok hei. 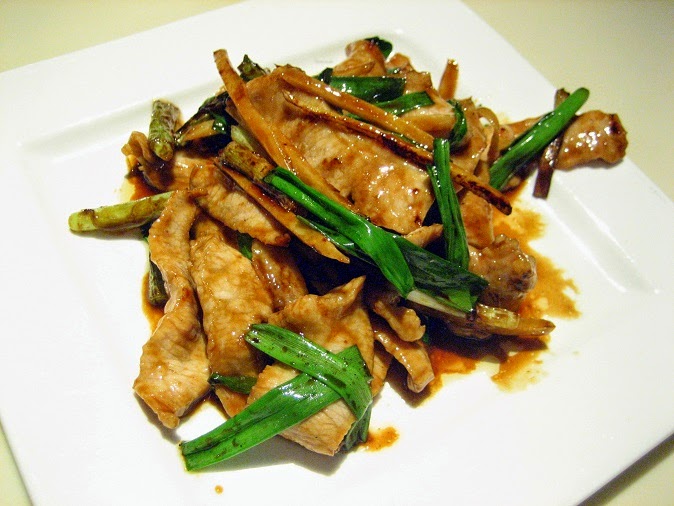 The Fried Shitake Mushrooms with Basil and Garlic ($14), served piping hot in a claypot to retain heat, was the vegetarian version of the classic 3-cup chicken. The meaty earthy shitake mushrooms were a wonderful base for the bold and peppery seasonings. 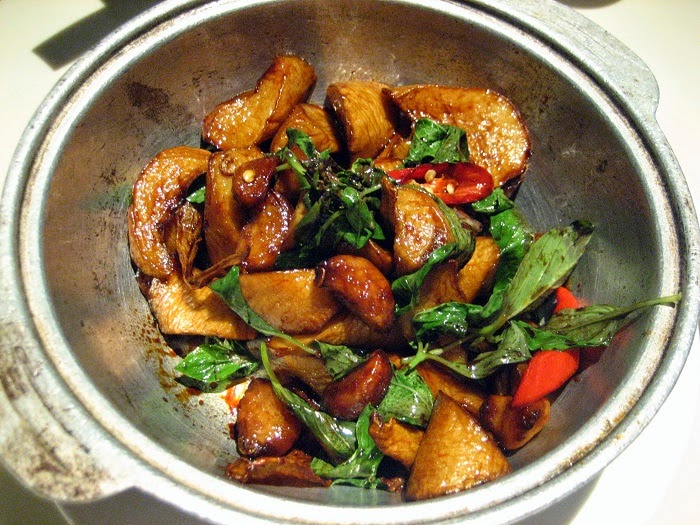 Another drab-looking-but-fantastic dish was the Dried Sole and Chinese Cabbage Claypot ($16), brimming with the sweetness of the greens and umami intensity of dried sole fish. 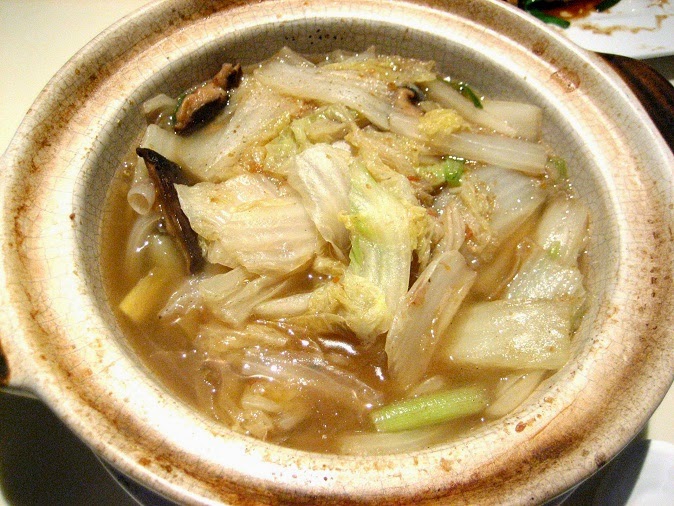 The soups was where Shin Yeh needed work. The Braised Sharks Fin ($28) with crabmeat and roe, while plentiful in crabmeat and fins, was disappointingly lacking in depth of flavour. 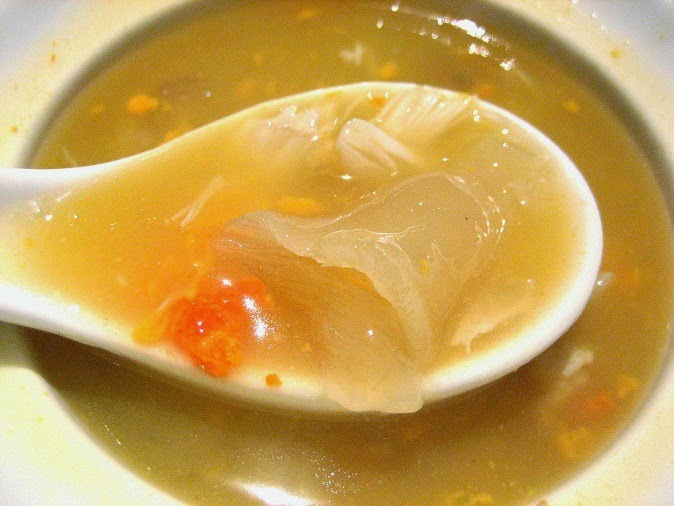 Ditto for the lackluster Braised Fish Maw Broth ($12) with sea cucumber. This was swimming with gooey starch but the stock base was insipid. The ingredients were also pathetically scarce. 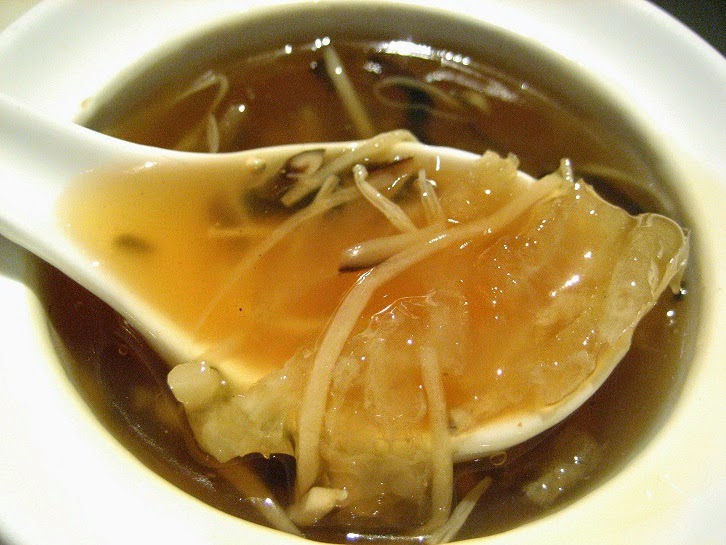 We loved the idea of complimentary after-dinner sweets, Muah Chee, a chewy nutty throwback of yesteryear. 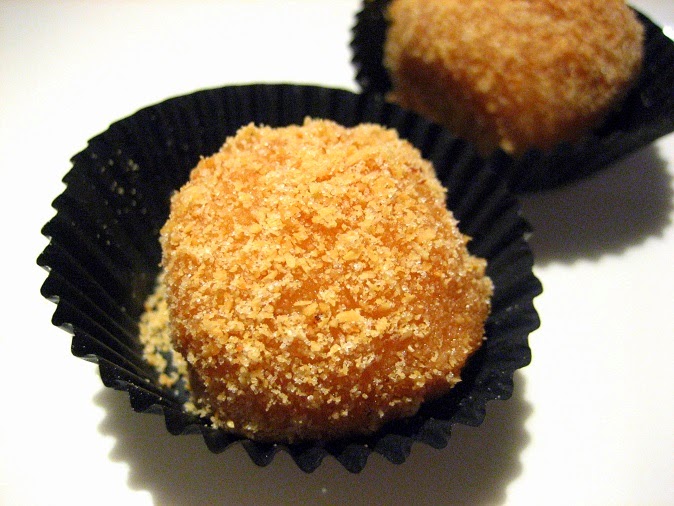 err, ahem, momentary lapse in a very tough week at work. safe to say i wont be ordering any sharks fin here anymore...heh! :)