Tucked away in the hip (not hipster) enclave of Ann Siang Hill, Lolla, a notable member of the small plates bandwagon, has been drawing in the crowds with its care-free, fuss-free approach to food. An informal bar-like joint with a theatrical open-kitchen concept (for maximum interaction with the chefs), I liked that the restaurant was a lot less stuffy or pretentious than I'd expected.

That said, the food, while good, just wasn't remarkable enough for me to get on board with the small plates movement. It may be that there were a great many things on its carefully curated menu that I don't fancy (like their uni pudding or beef tripe or octopus or bottarga-laced eggs or eel tortilla or beef tongue), which so happen to be their signatures. But, it didn't help that Lolla's price points aren't quite commensurate with its portioning. Thing is, the food here is rustic while being delicately portioned, but I happen to like my food the other way around, i.e. delicate food in rustic, hearty portions. However, the desserts were stellar, and very value-for-money. If anything, we may return just for desserts. After having a more substantive meal elsewhere.

Lolla's service was outstanding though, and our waitress was just brimming with warmth and sincerity. Which was why I felt so bad when I'd inadvertently got her into trouble because of my request to hold off the parsley/cilantro/coriander/spring onions (apparently, my "special request" wasn't communicated to the chef who'd been, very evidently, ticked off by and impatient with the waitress' lapse). For a while there, it felt a little bit like being at the front row seat at Hell's Kitchen.

The Soft Egg with Sausage & Potatoes ($16) a breakfast hash of sorts, was well executed, and a fine example of how a dish becomes so much more than the sum of its delicious parts, with a liberal dose of fragrant olive oil and smear of the perfectly poached egg. 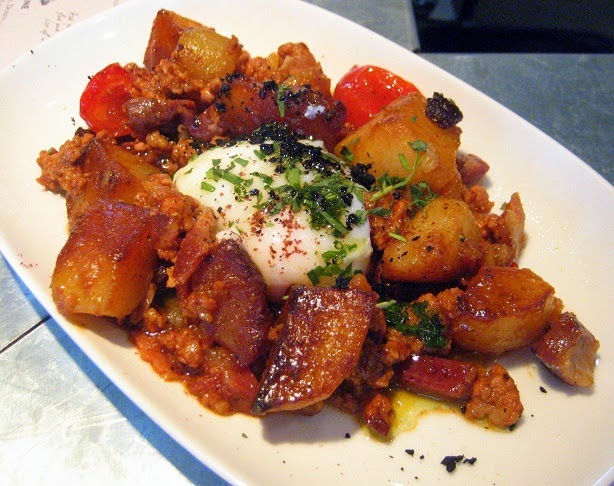 The Duck Fat Potatoes ($13), encrusted in a beautifully bronzy shell, made for a good tummy filler. 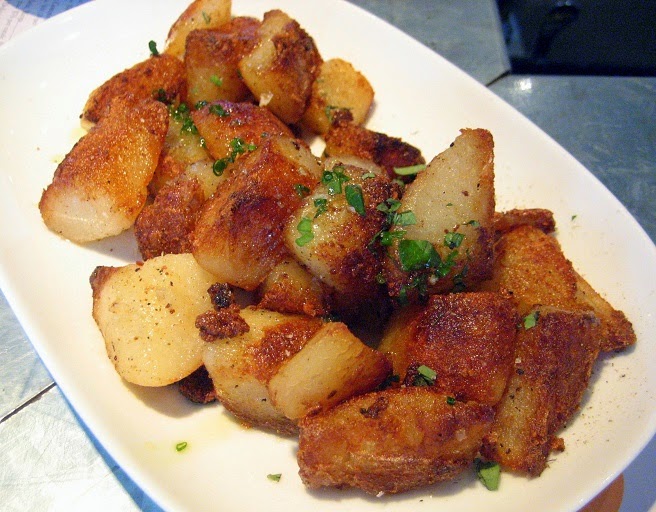 The refreshingly chilled Burratina Grilled Portobello ($28), bursting with clean and clear flavours, was a nice medley of the creamy and earthy and crisp. 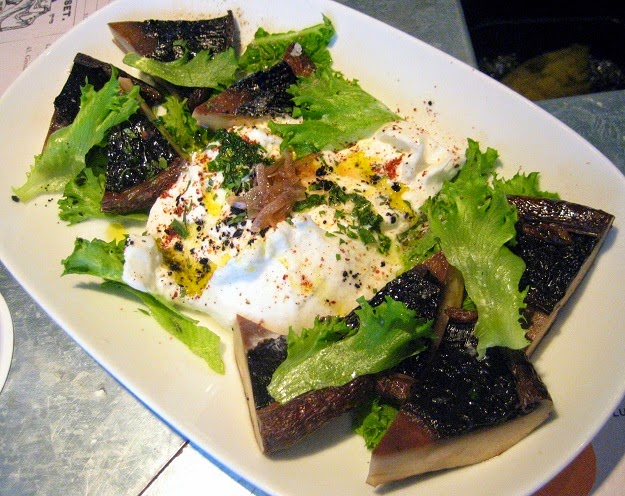 The Grilled Chicken Breast ($26), showered with capers, basil pesto and set in a pool of lovely chicken jus, was incredibly moist, but teetered dangerously between the cooked and raw (just so you know, none of us got food poisoning, although we were picking it apart to make sure it was thoroughly cooked). I liked the intense sweetness of the sundried tomatoes weaved into polenta but it was marred by the overwhelming bite of horseradish. 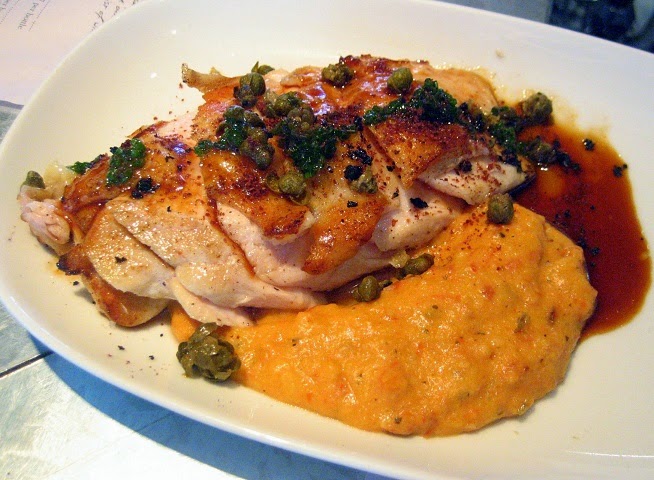 The Pan Seared Foie Gras with Brioche ($34) was scrumptiously unctuous, but I thought the onion-laced crab tomalley was somewhat like stuntman no. 3 on a movie set. I wouldn't have missed it if it wasn't there. 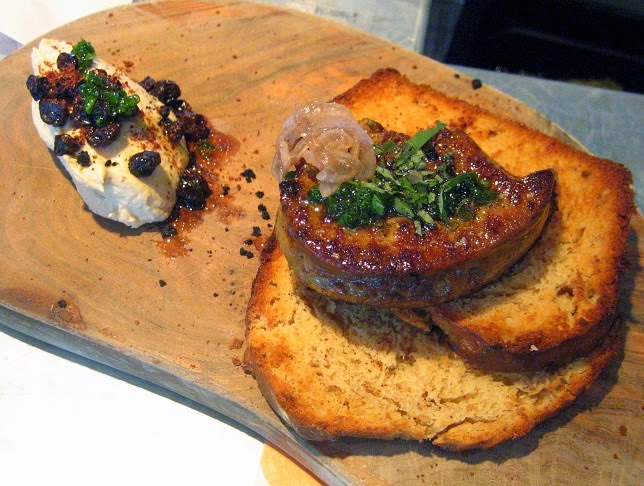 The highlight of lunch, the Steamed Dark Chocolate Pudding ($15), freckled with coffee and chocolate chips for added crunch, was exquisitely balanced. The vanilla ice-cream provided a wonderful juxtaposition. 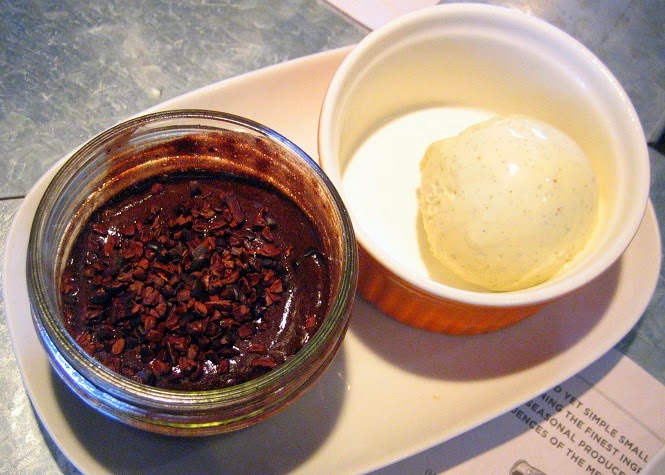 The dainty Doughnuts with Lemon Curd ($12) was perfectly nuanced, and I loved how the controlled sweetness of the fluffy doughnuts contrasted with the bright accents of the lemon curd. 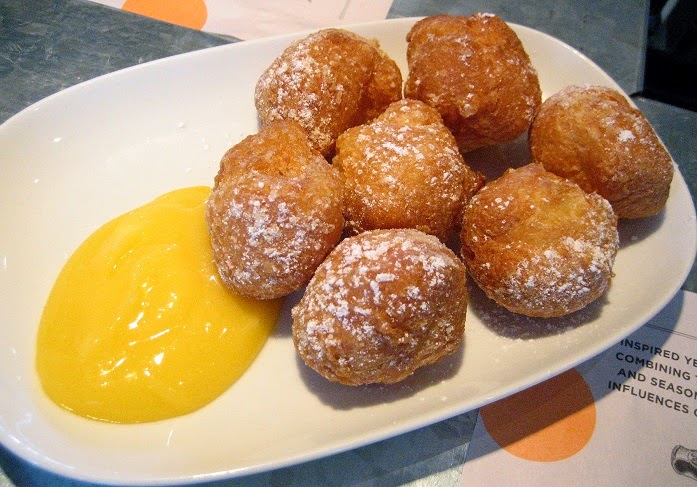 tsk at the small portions, but the dishes look delicious (especially those potatoes!)

I really want to try the urchin pudding myself.