Fans of the defunct Italian ristorante Bonta will rejoice at the reformation of District 10 into a dinner-and-drinks venue. The gastrobar is part of the Bonta Group, so some of Bonta's beloved signatures can be found on District 10's newly launched dinner menu. The fare here is decidedly modern European, with a pronounced slant to Italian cuisine.

I mentioned before that service at Bonta was awful, and while the attitude is much better here at District 10, the competency and efficiency of the service here still leaves much to be desired.  At the 2 revisits with my girlfriends subsequent to the tasting session, service proved to be sluggish and clueless. A tip to sit in the indoor dinner area, where you'll face less issues getting the wait staff's attention, or refills of water. Also, payment with the Amex card affords you a cool 20% off the dinner menu, but only 10% if you order off the alfresco menu. Don't expect the staff to be aware of any applicable card discounts; I had to have my bill redone twice (that's 3 different bills altogether!) because I had to educate them on the applicability of the Amex discount. The saving grace of the lacklustre service is the affable and very likable Maitre'd (oh crap, I totally forgot the cutie's name).

The shortfall in service was made up by the mostly excellent Italian fare, even if their meats and poultry can be a bit of a hit and miss. District 10, afterall, boasts Italian pedigree. A real plus point is the wine list; the wines sold by glasses are, albeit limited in range, very drinkable and eye-poppingly cheap. My take is to stick with their pastas and pizzas, get at least a glass of alcohol, be cautious with their meats, sit in the indoor area, and you won't leave disappointed.

At the tasting, Pan Fried Goose Liver ($20) was easily the best starter dish. Smooth and rich, with a thin caramelized crust, this just melted on the tongue. The wild berries compote and balsamic syrup added a tang and sweetness that cut through the rich decadence of the liver. 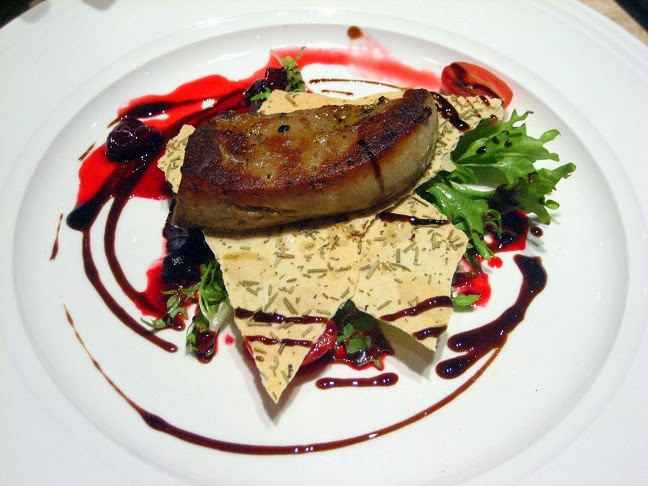 At the tasting, the Green Asparagus with fried egg sunny side up, and sage accented butter was excellent. I loved how the generous shavings of Parmesan lent flavour to the fibrous greens. 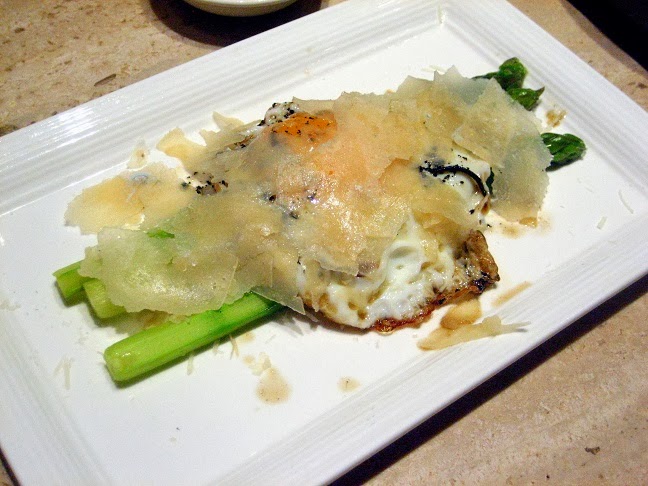 At the revisit, Green Asparagus ($18) had less Parmesan shavings but they carried enough flavour. This time, the sage accented butter drizzle was more noticeable, as it'd gotten lost in the previous rendition. 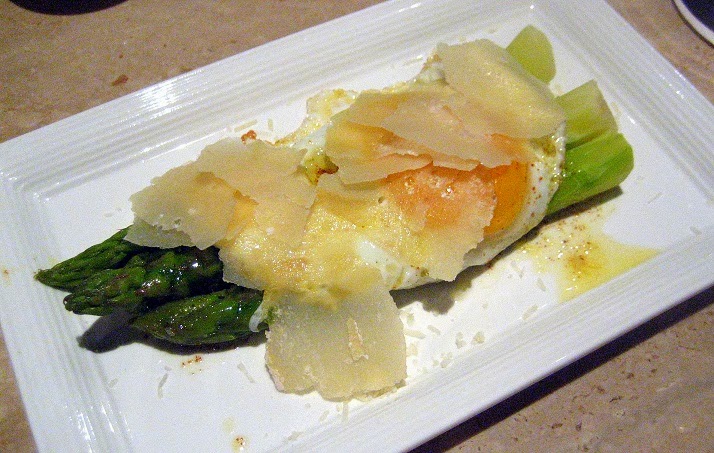 At the tasting, the Burratina Cheese ($18) was simply dressed with a couple of boiled peas, sun-dried tomato puree, and extra virgin olive oil, to leave the focus on the fresh and mildly creamy cheese. Not my favourite cheese but it was good. 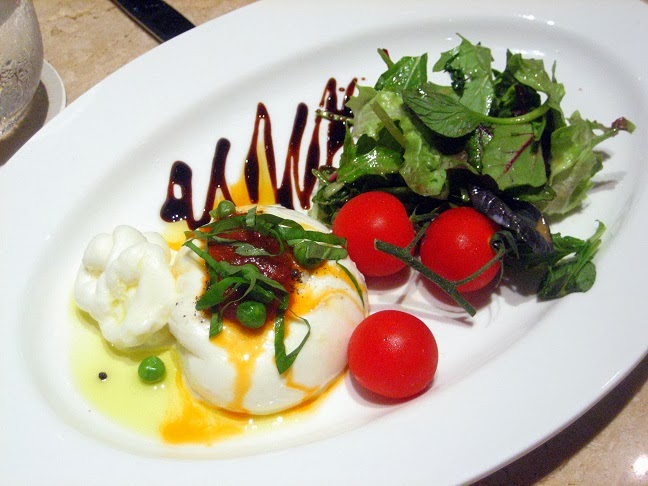 At the second revisit, we ordered an appetizer from the al fresco menu, the Calamari ($12) sided by a wasabi mayonnaise. The squid rings were fresh and cooked perfectly, but they were completely unsalted, a major fail. 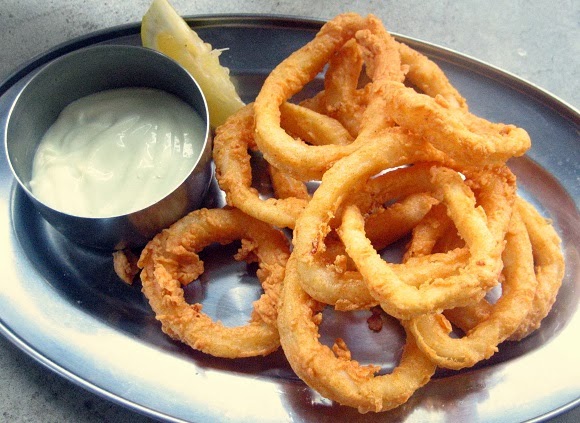 At the tasting, the Homemade Angel Hair Pasta with Lobster with peperoncino, basil and fresh tomatoes was superb. Chewy and soft, the al dente strands of pasta were complemented by the chewy lobster chunks. 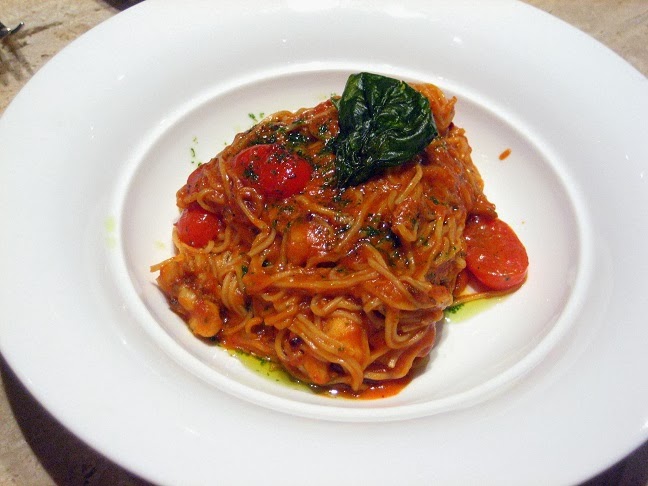 At the revisit, we opted for a thicker pasta, the Homemade Linguine with Lobster ($38) which was a big hit with my galpals. The use of basil and pepperoncino made this hearty and robust, with fresh lobster upping the luxurious factor in a traditional comfort food. 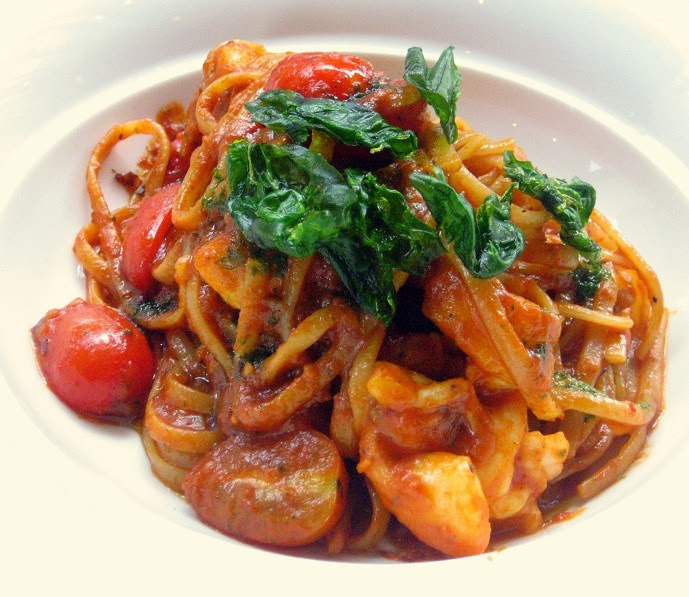 At the tasting, the Homemade Foie Gras Ravioli with Parmesan sauce and scamorza cheese was brilliantly contrasted by the basil-olive oil blend drizzled upon the cream-based pasta sauce. 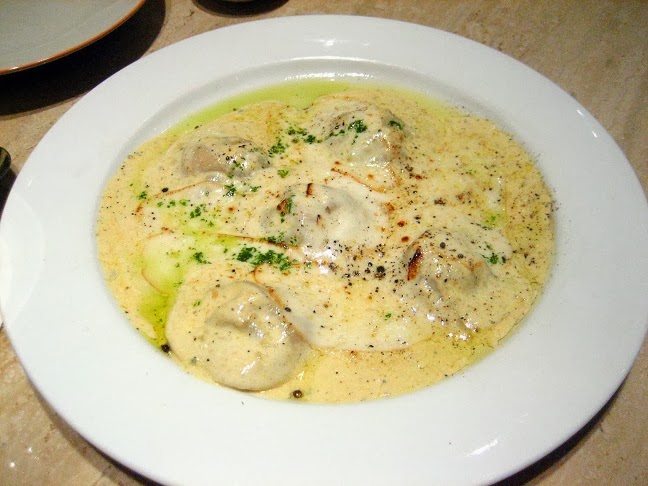 At the revisit, this was a surprise favourite, as none of us were fans of foie gras or in a mood for cream-based pastas. The Homemade Foie Gras Ravioli ($34) with Parmesan sauce and scamorza cheese, and heavily perfumed by truffle oil, was kept from cloying by the bright and peppery basil and extra virgin olive oil emulsion. 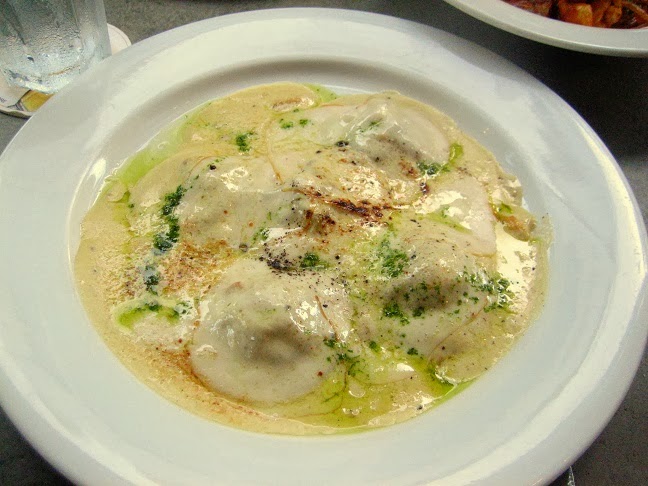 At the tasting, the Crispy Goose Leg Confit was less than stellar. The meat was moist and tender, but didn't quite possess the fall-off-the-bone texture. A whole roasted garlic, grilled cherry tomatoes and a slightly lumpy potato mash sided this relatively ordinary main. 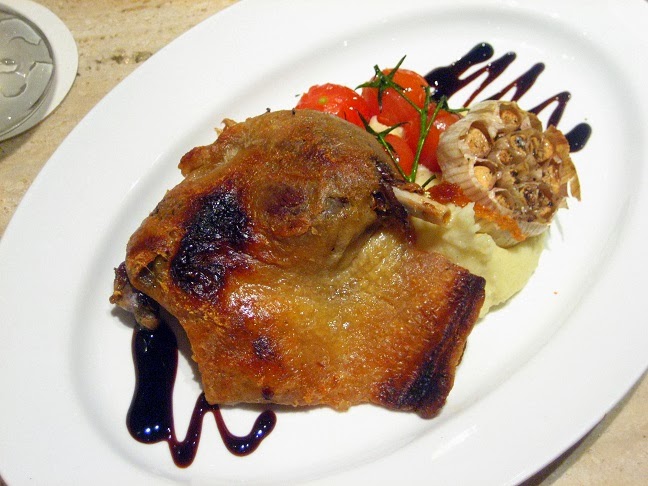 At the revisit, Crispy Goose Leg Confit ($26) while flavoursome, was again, not meltingly tender or moist enough. Good crisp of the skin and good flavour though. 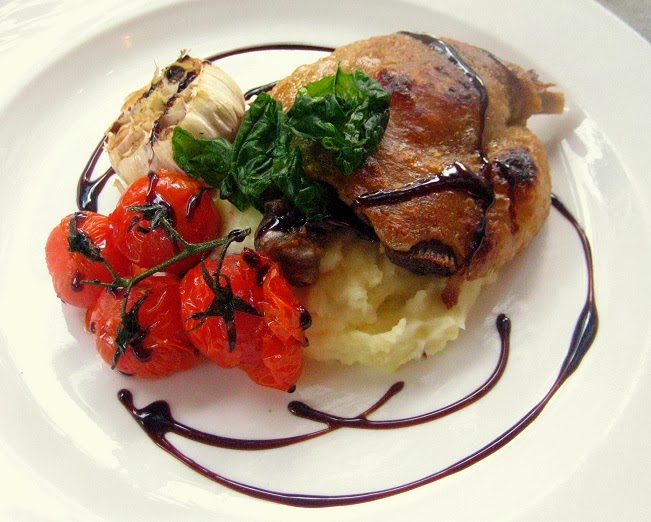 At the tasting, the beef impressed the least, even if it was topped with the most shavings of black truffle ever. It was unfortunately, done medium well, resulting in a chewy piece of meat that was tough to get through. At the revisit, we asked that the Signature Black Angus Beef Striploin ($36), with fried eggs and thick cut fries, be cooked "medium rare, but more rare-ish". That's the thing about most restaurants in Singapore. You have to ask for half a stage rarer than your preference in order to get your preferred doneness right. The beef was good but hardly outstanding, but what stole the limelight was the fries, fried in goose fat for maximum heart-clogging pleasure. They were delicious entirely on their own, even if the black pepper gravy was pretty damn fine. 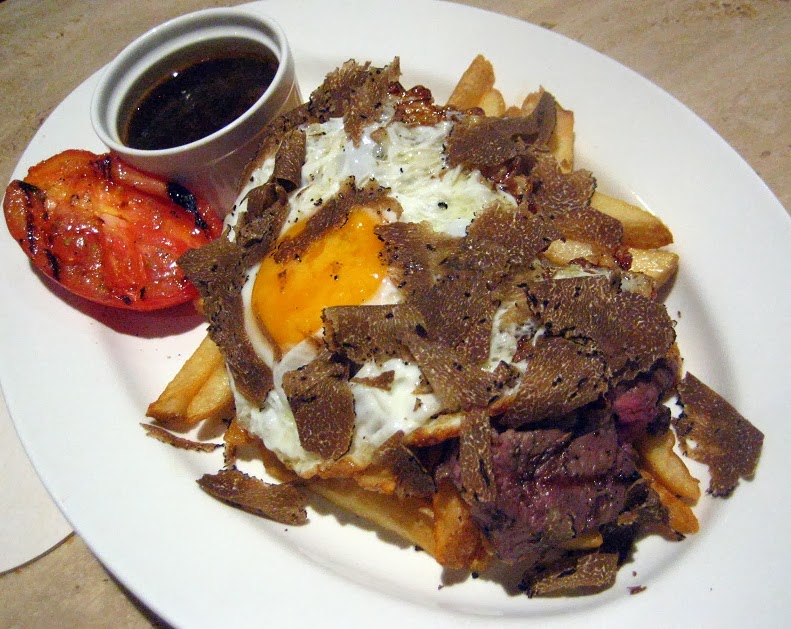 At the tasting, the Roasted Atlantic Cod Medallion with Spanish smoked paprika and herbed oil was excellent. Justice was done to the fish, and this was very moist. 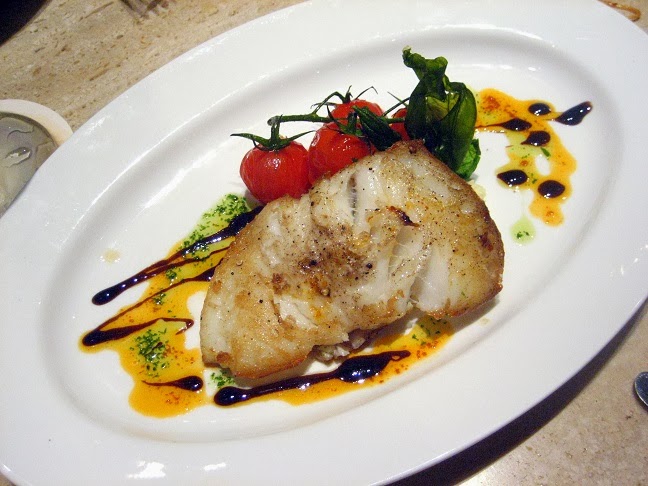 At the revisit, the Roasted Atlantic Cod Medallion ($32) had a darker, more caramelized crust, very toothsome especially when contrasted with the moist flaky flesh underneath. The drizzle of Spanish smoked paprika and herbed oil was more piquant this time as well. 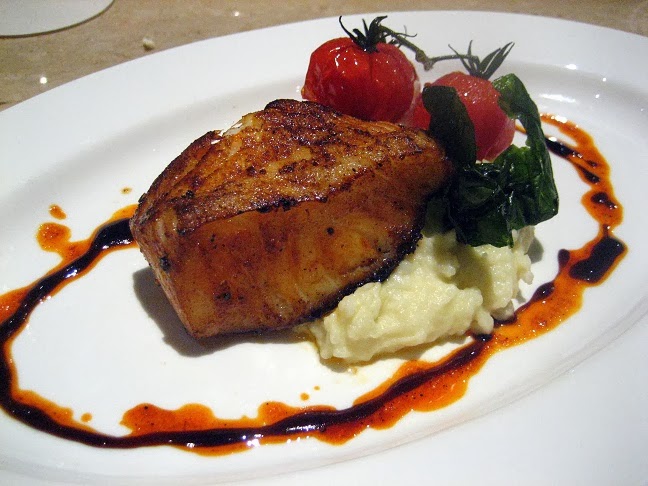 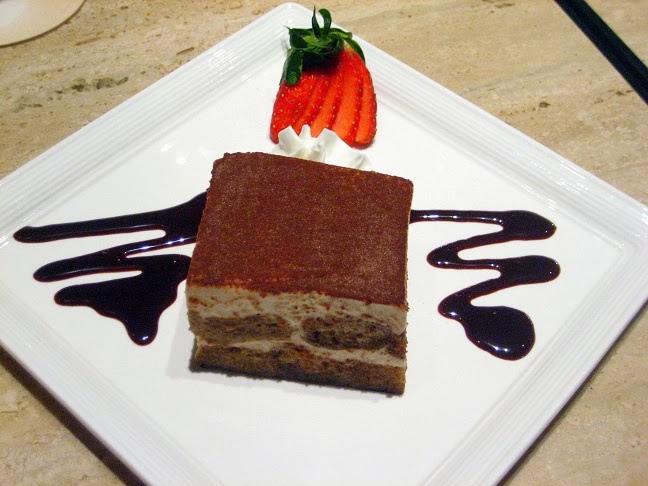 At the tasting, the Cinnamon Apple Fritters were, despite the liberal sifting of icing sugar, unexpectedly sour-ish. Apparently they use young green apples here to give this a deliberately bright flavour. I didn't like it. I much prefer my food traditional, with warm sweet gooey cinnamon-ed apple fillings. 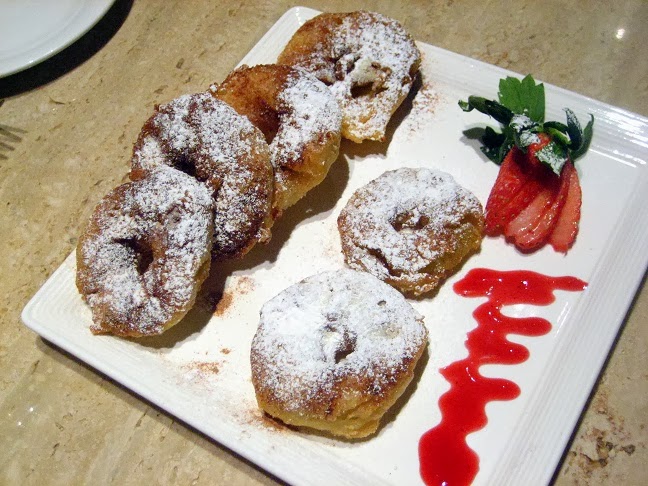 At the revisit, my girlfriends concurred with my view of the Cinnamon Apple Fritters ($12) dusted with aromatic cinnamon sugar. Too tart. Too sour. Would have preferred ripe red apples. 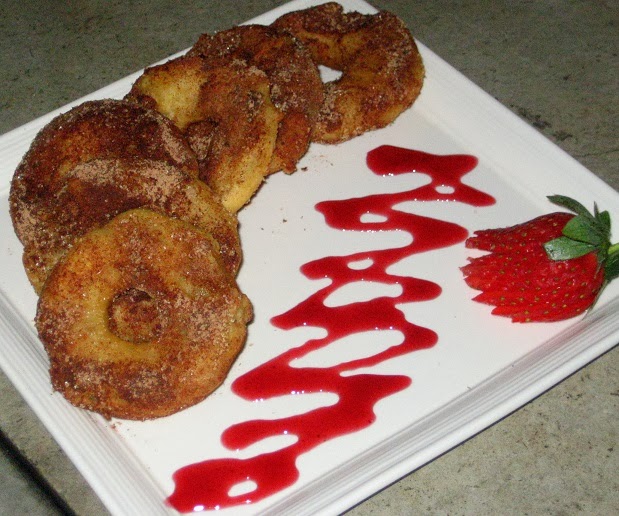 We imbued at the tasting, a highly recommended Cocktail named D10 Punch ($34 for 3-4 pax), with moscato, creme de cassis, dark rum, apple, strawberries, mixed berries and ginger ale, its sweetness belies how deadly potent it really was. At the revisit, we had the very drinkable (for lightweights like me) Castello Del Poggio Moscato D'asti 2011, which was very very attractively priced at only $10 per glass; and the Borgo Sanleo Pinot Grigio 2012 ($15); and the Australian S'tate Shiraz 2011 from Margaret River ($12) which harmonized beautifully with the steak. 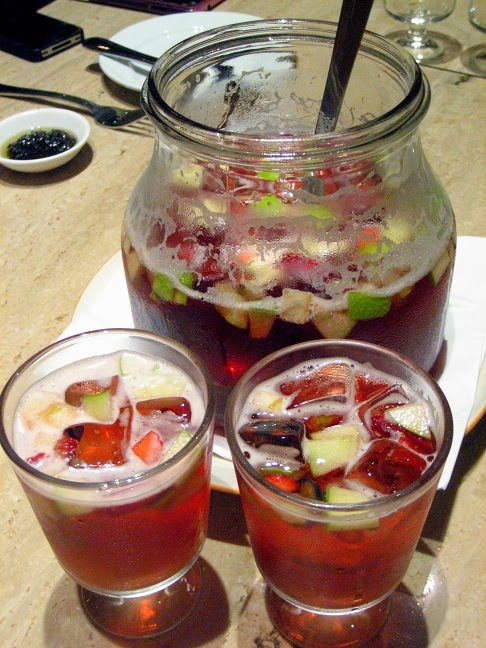 The complimentary Bread, warm and toasty, accented with sun-dried tomatoes and stuffed with salty feta, was married beautifully with an olive tapenade. 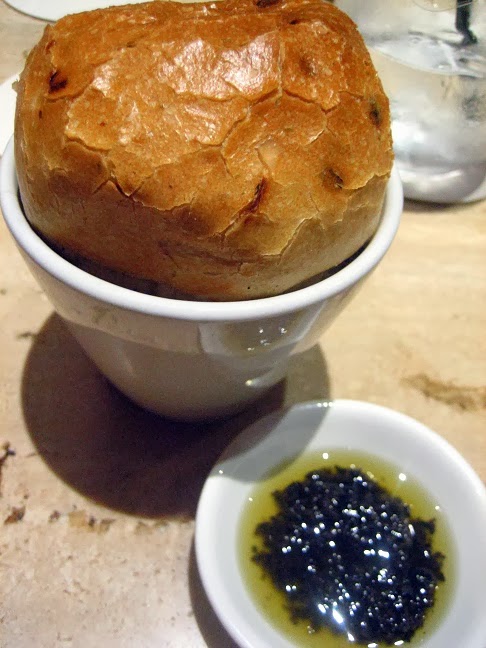 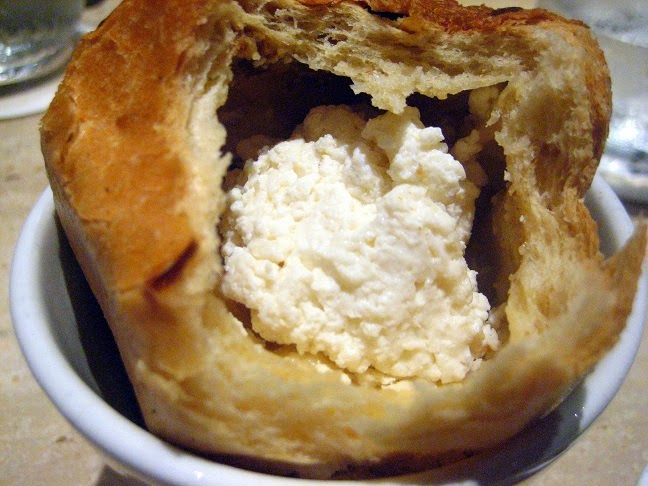 At the first revisit, Addie, despite being a carb-free diet, took immediately to the complimentary Bread cup. To save on tummy space, we refrained from indulging in one whole cup by ourselves and shared one between the 2 of us. 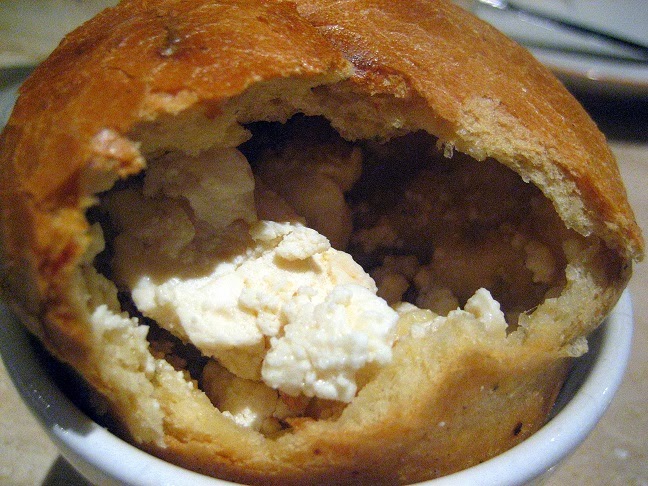 Thanks to Cyndiana of FoodNews PR and Zen of District 10 for the hospitality!