After 2 whole months of renovations, Golden Mile Food Centre (or more commonly known as the "Beach Road Army Market" because the 3rd and 4th floors are filled with army supply stores that our local national servicemen and reservist men frequent to stock up on army supplies) is finally open. Personally, I don't see any difference whatsoever to the popular hawker centre.

Many of the shops here are marked by long snaking queues of patient fans and laminated or framed news writeups and TV-show endorsements. This is one of the more popular hawker centres in Singapore, and rightly so, there's a veritable range of noteworthy stalls to choose from.

One of the more famous stalls here is the 91 Fried Kway Teow stall, which touts itself as a healthier alternative to the local favourite by using vegetable oil and refraining from the use of lard. You can't miss it. Flashing neon lights adorn the stall front. The Char Kway Teow ($4 for large) is served with a distinctive layer of green leafy vegetables and crisp silver fish topping. I've never really understood the hype about this stall. Taste-wise, it isn't mind-blowing. And if you think that a bunch of artery-clogging oil-soaked chai sim are going to help lower your cholesterol, then you've got another thing coming.

Plus, a huge downer of this place is the overtly stingy serving lady. She counts every single little green leaf as if she's deathly afraid she's gonna give you one more leaf than your plate of $4 noodles is worth, and refuses to give you one more pair of chopsticks even if you order a large plate of noodles. You know, that's the problem with hawker stalls that have been "discovered" and consequently become famous. Their breeches are suddenly too tight and their heads swell with fame. The hawkers suddenly develop an attitude problem. They become complacent and that inevitably breeds lowered standards. Sometimes, the presence of TV and news endorsements serve to make me avoid me the stall instead of drawing me in, because it sometimes translates to an overhyped allure. 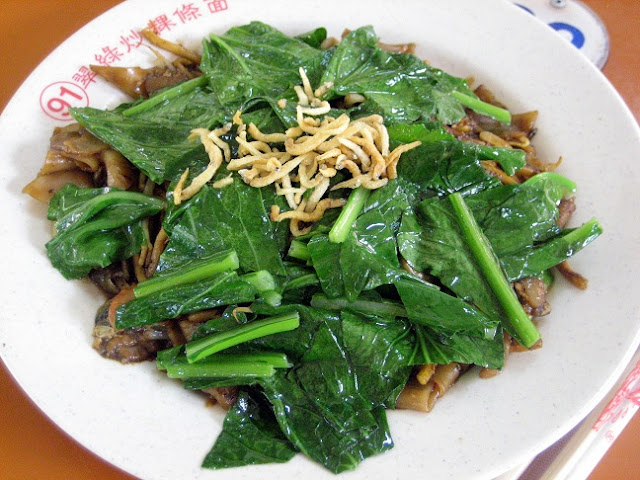 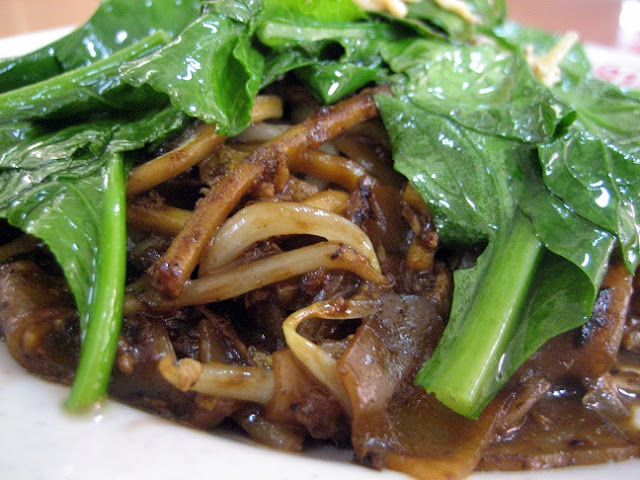 Those really "in-the-know" will make a beeline for the hidden gem on the bottom level. The Fried Kway Teow ($4 for large) here is done the traditional way, with glorious lard, Chinese sausage (i.e. lup cheong), fishcakes and fried to savoury smoky perfection. Half a wedge of lime provides a unique refreshingly sour lift to the heavy grease of this local classic. If you're gonna use up half a day's worth of calories on a plate of grease, you better make sure it's worth it. And trust me, this is well worth the extra hours on the treadmill. 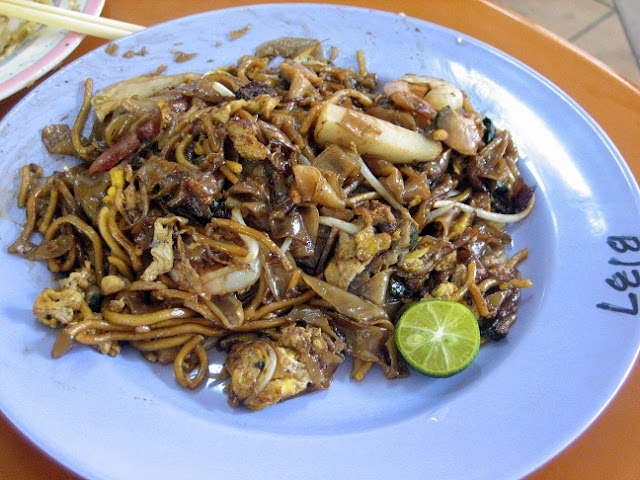 The stall front for reference. Even if it sells other noodle dishes, stick to their moniker. That's what everyone in the queue is waiting for. 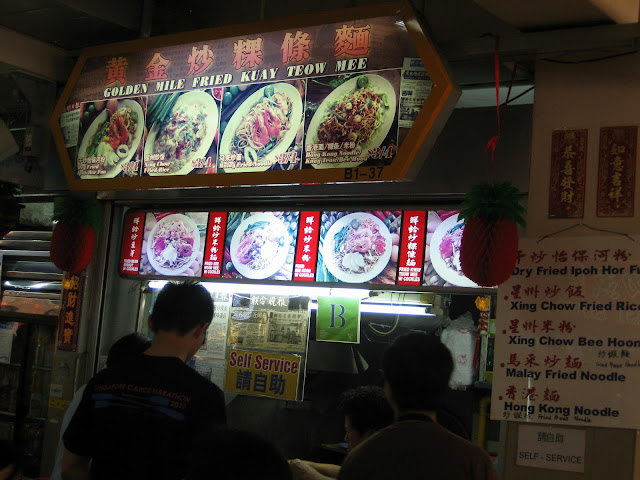 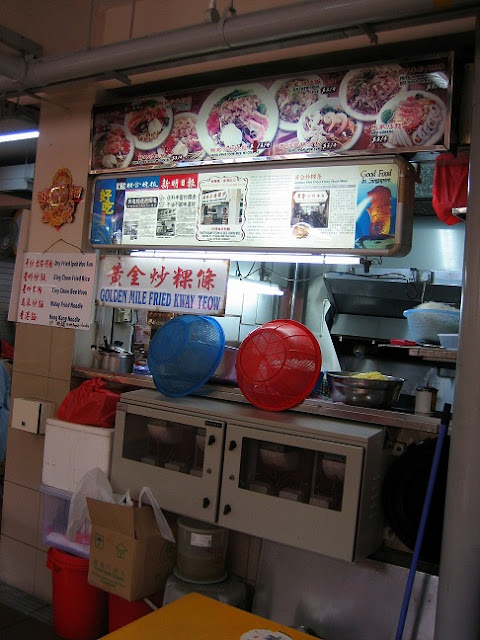 The Hokkien Mee ($3) here is also another crowd favourite, as evidenced by the long queues. This is one of the better versions we've tried. The prawn stock used to imbue the rice noodles with flavour is awesome. Every mouthful is a burst of flavoursome shrimp stock. There's a slight hint of wok hei to this, so the robust shrimp taste is finished off with a rounded smoky essence. 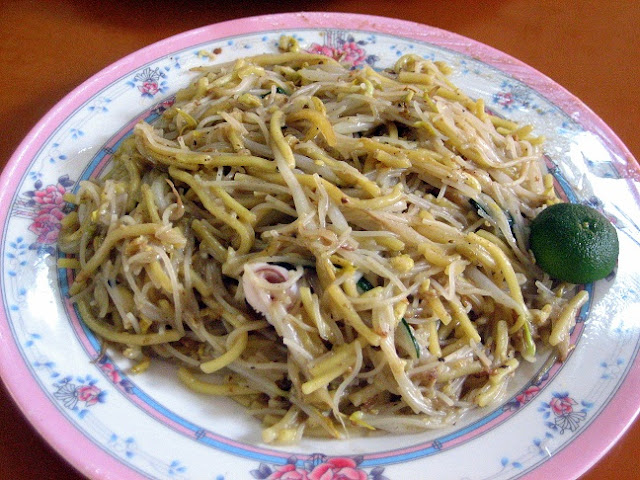 The stall facade, the fried kway teow stall is just round the corner from this. 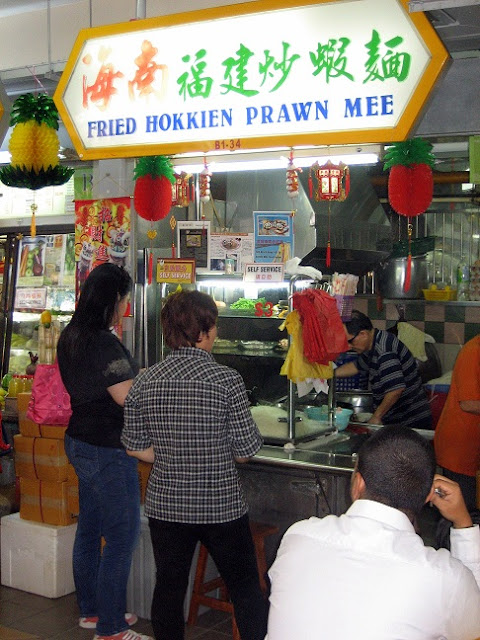 Just beside the hokkien mee is another notable hawker that sells boneless chicken rice. The Chicken (half for $9) is succulent and juicy, definitely one of the better renditions of our national heritage dish. If you're sitting on the same floor as this stall, they will serve this to you. Otherwise, it's self-serviced style. The portions are a little small but it's so cheap anyways you might as well get the whole chicken portion if you're a big eater. 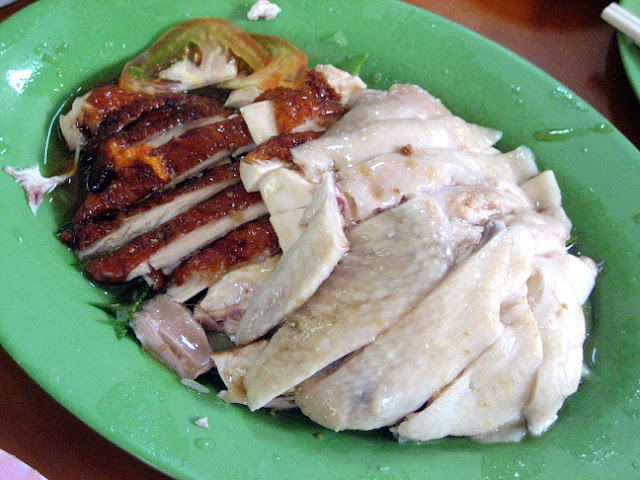 While the Rice ($0.50 per plate) isn't super tasty or aromatic enough to eat on its own, it does set up as a very nice backdrop to the kickass chilli and garlic. 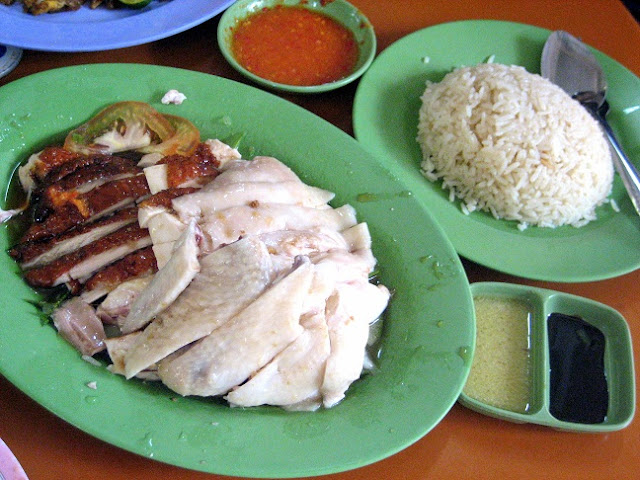 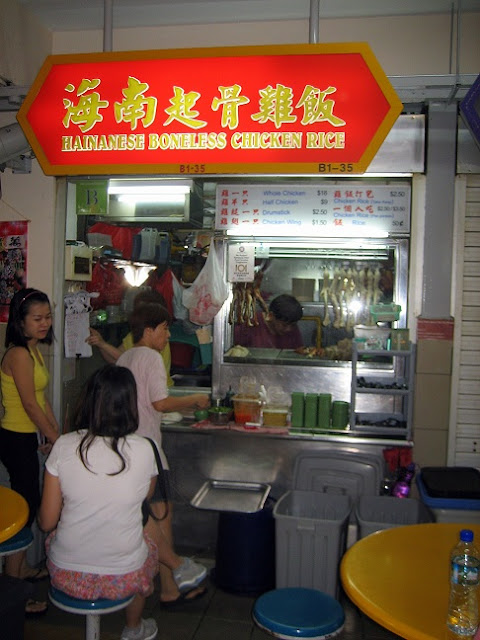 Healthi-fied hawker food is such a buzzkill. Give me that unhealthy but authentic stuff any day!

exactly! and it's not like the "healthi-fied" stuff is actually healthy anyways.

You're back in the poorhouse again? Poor baby.

no lah, i was craving char kway teow.

I have never tried the Hokkien Mee, it looks good!

The Boneless Chicken Rice is darn good and cheap! I love it!

Did you try the chicken curry noodles (its darn good too!)? Its located at a corner of B1, along the same row as the claypot chicken rice and claypot bak kut teh.

didn't try the rest. wanted some claypot rice but they were closed that saturday. besides, there were only 4 of us that day so our stomachs were a bit limited. will try those in future!

I hate 91 ckt. Don't really mind the veg but the kt was really tasteless. Never try the ckt from the other stall, shall go check that out. This comment comes from a person who also hates the ckt stall at ghim moh market, super long queue, lotsa hype but mediocre ckt. Don't understand.

it's such a case of monkey see monkey do, isn't it?

Eh don't defame the monkeys. They have better taste!

wahahahaaa! thank u for making me laugh.

Traditional Char Kway Teow is meant to be fried with lard. If you care so much about the cholesterol level, then don't eat it.

I eat my Traditional Char Kway Teow only with lots of LARD & COCKLES!

hahaaa...you make a gd point. but those ppl who have heart problems, like my dad, still crave for these "unhealthy" foods, so ckt cooked with vegetable oil is properly the next best alternative to indulging in the lard-fried ckt. my 2 cents worth! :)