Maggie Joan's takes the prize for the most hidden gem ever. Hidden because it's so tucked away and its facade almost concealed, you'll have to be looking for it to find it, and not because nobody knows about it; it's actually quite illustrious and lauded. In spite of its Amoy Street address, access to the tiny galley of a restaurant is from Gemmil Lane, which is in-between and runs parallel to Amoy Street and Club Street. To get here, look out for the Gemmils restaurant signage (it's huge and you can't miss it) as a marker; Maggie Joan's is just next door.

The modern-fusion small plates fare at Maggie Joans was outstanding; no small feat considering its prime location amidst a sea of excellent (and competing) restaurants.There was a polished finesse in execution, and an effortless restrain that brought balance and harmony to the food here. Absolutely smashing, and we loved it.

On this note, I've to say I'm really liking this movement towards innovative modern-fusion cuisine, where no one restaurant is the same as the other, and the dishes found in one will not be found in another. Each restaurant sets itself apart from the rest, and brings a little unique magic to our culinary landscape. I think, this is why, when I visited Melbourne mid last year, I thought Singapore's fine-dining gastronomic options were very much on par.

That said, there's room for improvement in terms of service at Maggie Joan's: our waitress was either painfully shy or sluggishly depressed, and she wasn't quite as familiar with the menu as to be expected of an establishment of such ilk.

The Tomato Bread & Iberico Paleta ($16) was a fantastic crostini which contrasted the salty pungency of jamon with the refreshing tartness of crushed tomatoes. 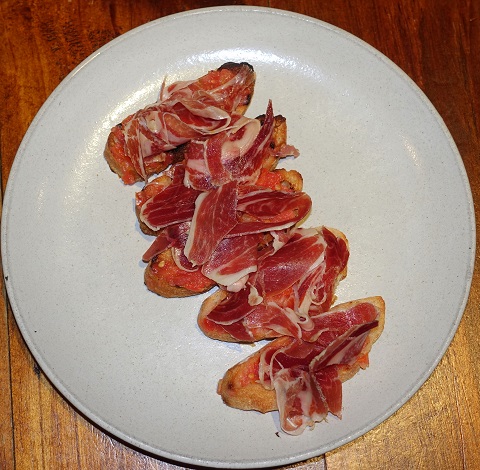 The Baked Taleggio ($9) was an oozy puddle of melted cheese enlivened with honey drops, almond, and fresh rosemary. 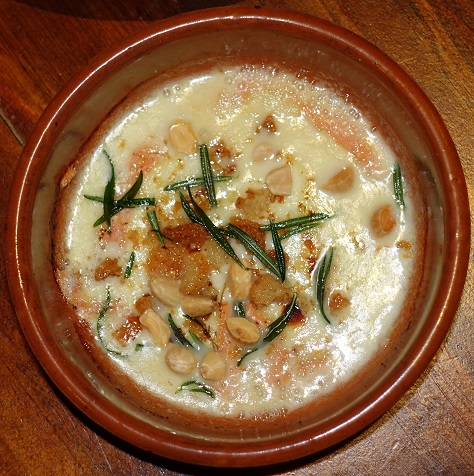 The "Gypsy" Style Baked Eggs ($16), a Romani interpretation on Tunisian shashouka, was loaded with chickpeas for a heartier fill, while a few lumps of chorizo lent a meaty accent. 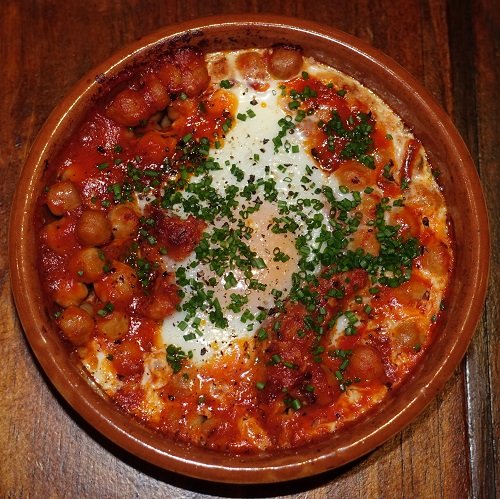 A must-try, the Cured Salmon Tartare ($17) dotted with dill, chives, pickled cucumber, and yoghurt, was scrumptious. It was clean and clear and light. Best salmon tartare, bar none. 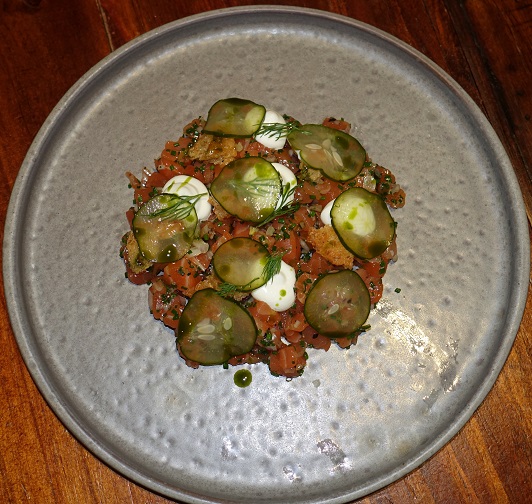 The Chicken Liver Parfait ($17), paired with a red onion jam, was quite the surprise. None of us were very keen on ordering this, and but for HP who loves his livers, we would have skipped this. But wow, it was incredibly smooth, like a foamy mousse, and so unbelievably delicate, that we wouldn't have known it was chicken liver if we hadn't read the menu. We dug into this ravenously, it was amazing when schmeared on toast. Also a must-try, and best rendition of chicken liver ever. 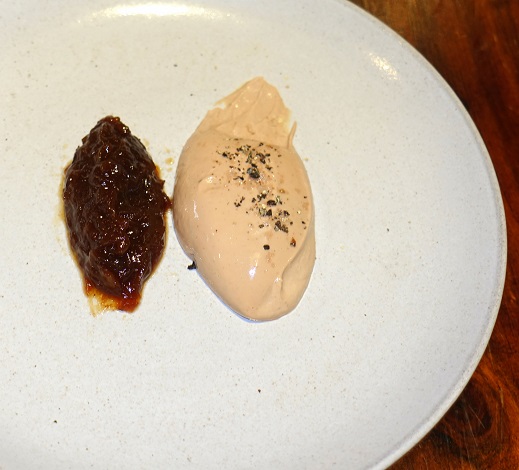 One of the bigger plates, the Pan Roasted Bass ($32) was fleshy, flaky, and moist. Seasoned with red pepper lardo, the piquant dill & sour cream cut through the mellow spice of the marinade. A side of charred lettuce provided a smoky crunch. I loved this, not least because I love fish, but because it was simplicity at its finest. 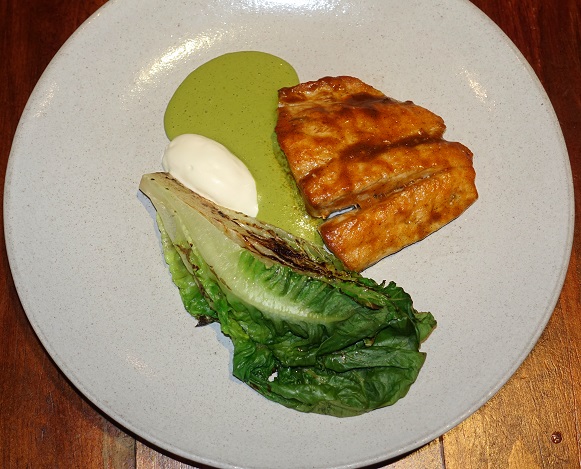 Another must-try, the Grilled Mediterranean Octopus ($45) was set on a bed of Persian potato salad, and sprinkled with paprika. Izzy, who loves octopus and has eaten more than her fair share of octopus, affirmed that this was, hands down, the best octopus she's ever had. Sparkling fresh, it was succulent and tender, and cooked perfectly for that chewy-soft balance. 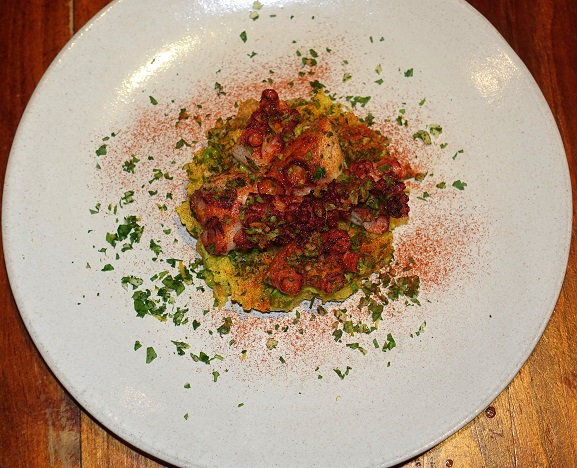 The side dish of Cucumber, Pomegranate & Sesame ($9) was a lively and crisp palate-cleanser to the savoury notes of the mains. 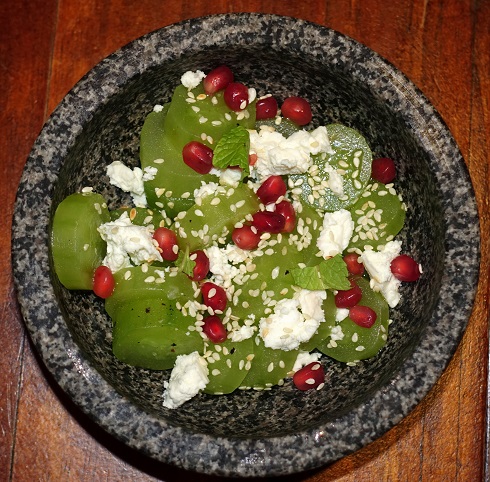 The dessert-of-the-day was a Chocolate Tart ($10). This was homespun and sumptuous, its semi-sweet tones cut through with the tangy creme fraiche. 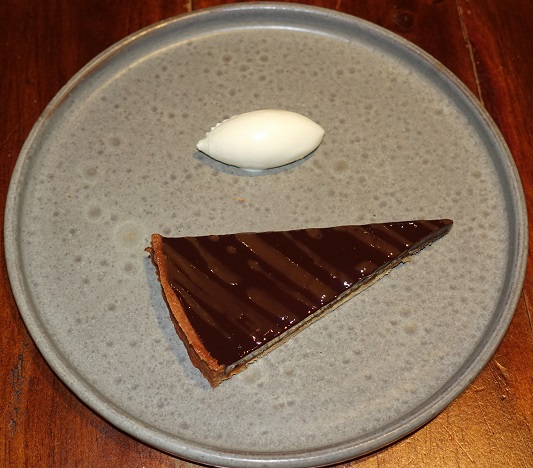 Crusty Bread served alongside butter was very handy in mopping up the eggs, cheese, liver, and salmon. So good, we had triple helpings of this. 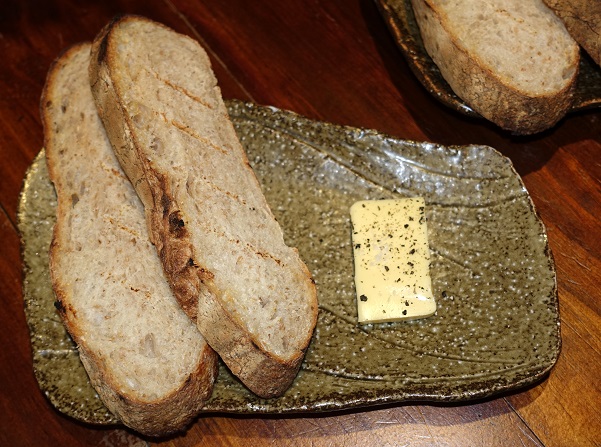